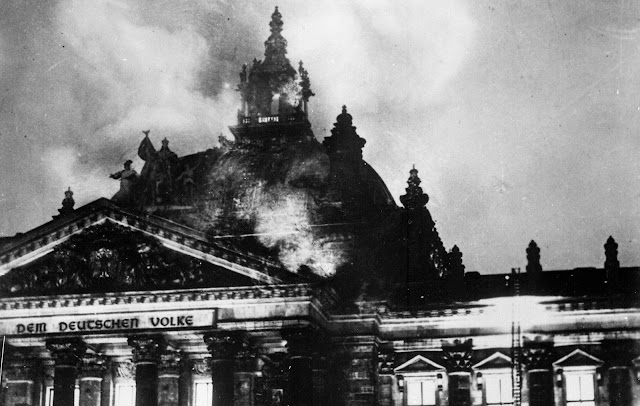 "Herman Goering, sweating heavily, was running toward the fire, shouting himself hoarse. He was saying the burning of the Reichstag was obviously the signal for a communist uprising, and the communists must pay for their crimes. There was no uprising, the Communists were in hiding, and they had every reason not to burn down the Reichstag."

- Robert Payne, The Life and Death of Adolf Hitler

Though some official sources still lay the blame for the Reichstag fire at the feet of a half-blind Dutch Communist, as Robert Payne notes in The Life and Death of Adolf Hitler, it's an impossibility that van der Lubbe would've had the capability, let alone the wherewithal or motive to do such a thing.  The fire started in multiple locations in the giant building. He had been befriended by some SA officers previous to the fire, and was conveniently found inside an unburned portion of the building. Herman Goering rushed immediately to the scene, and wasted no time emphatically blaming Communists for the fire. Burning down the German Capitol building is surely the type of act that would signal to anyone that they must be destroyed. But if the Communists had had the plan to burn the Reichstag in order to launch a coup, surely it would've been them first on the scene to absolve themselves, and not the Nazis?

The reality is that Hitler needed an event to galvanize his power base, and according to Payne, to show Hindenburg the true threat the Communists posed. The burning building was no doubt a shock to the aged statesman, only one year from his death bed at the time of the fire, and it would provide the Nazi party with the fodder it needed to consolidate their power and crush their enemies. In the month to come, through sheer terror, force, and will, the Nazi party grabbed power in Germany, and the Reichstag fire was the literal match that lit the fuse.

Though what exactly led to the storming of the U.S. Capitol building is still unclear, there is already abundant evidence that it was not Trump supporters who instigated it. To date, gatherings of Trump supporters, or indeed any so-called "right wingers" had been completely peaceful. Any violence was perpetrated against them, and they have responded only in defense. The psychology and demeanor of these gatherings has been heated, but it has never resorted to offensive violence or lawlessness. They follow rules. When police tell them to back up, they back up. The forrceful entry of the U.S. Capitol by Trump supporters defies all previous behavioral evidence.

Second, it happened during a crucial period of senate debate, when Arizona had the floor. Why would Trump supporters want to shut down debate in Congress while their case was being made? Conveniently for Joe Biden's election bid, as Arizona was presenting its case or about to present its case, "Trump supporters" stormed into the Capitol building to shut down the proceedings. And even more conveniently, when they reconvened later that night, all but six of the senators who were going to object to the certification of Biden electors, jumped ship because of the "violence" and "horror" of the events. There could not have been a better opportunity for the Congress to shirk their duty to the constitution and the American people but the excuse that "democracy" will fall if they decertify the electors.

But what of the violence and the horror? No one bore the brunt of violence more than Ashli Babbit who was shot and killed by Capitol Police. There will be legitimate questions about whether or not the use of lethal force was justified, and what really happened, but those are all moot in the scheme of things. Ashli Babbit is yet another casualty in America's color revolution and her death marks another significant escalation of the revolution. What led to her shooting isn't as important as the fact that she was shot, and that her death will be used as fodder by both sides. For the ones in power, they can again align themselves with the police after a summer of trashing them. For the Trump supporters, it further erodes their support of the police, and paints them as the lawless ones.

And just like the Nazis conspicuously rushing to the scene of the Reichstag fire, when the senate came back into session, they wasted no time fear mongering about the throngs of violent thugs who stormed into the halls of Congress. They all used their grandstands to bludgeon any possible future dissent under the guise of protecting democracy. "This isn't who we are." "This is not what we do." The ones in power had their out, and they took it. But they conspicuously failed to mention Babbit's death when they were so quick to issue statements about the tragedy of George Floyd's death. The praised the heroic acts of the Police when there was a perceived threat to them and their power. And they failed to mention that even when some patriots had gone into the halls of congress or sat at Nancy Pelosi's desk, there was still no violence.

And like the Reichstag fire, the events of January 6th gave our rulers a perceived moral high ground to consolidate their power. Just as Congress came back into session, social media sites launched a sweeping purge of accounts, including the accounts of President Trump. It was no secret they had wanted this all along, but the story of thousands of Trump supporters violently storming the halls of Congress was the cover they needed to make the move seem like a legitimate response to a legitimate threat, when in all probability, it was a threat of their own making. There were calls to remove Trump immediately from office under the auspices of an imminent threat to democracy.

But the reality is that our government is quickly losing grip on its power. And when a government loses the consent of its governed, it will do what it can to protect itself. Force is the only means a government has to maintain power when all else fails. There will be attempts to consolidate power. There will be purges. There will be escalation of force. If history is any guide, yesterday was only the beginning.

Below is but a few of the video clips which are too numerous for me to compile on my own, and which clearly show a different story of the events from the one portrayed by the media and by our government.

Psyop. Look at the photographers while going up the stairs and at the end. The officer is leading them where to go and gives the guy a little nudge and says “they’re here” when at the 2nd floor and officers just walk up and say “leave”. Paid crisis actors to look like agitators pic.twitter.com/U3BJ4REtpz