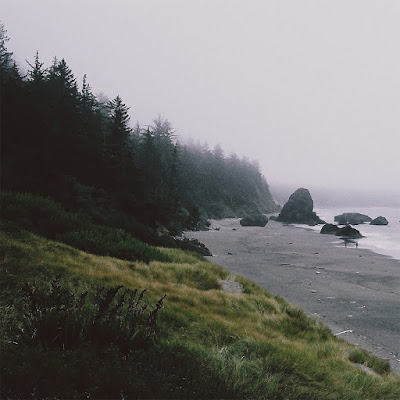 Austin Cairns is an ambient musician from the San Francisco Bay Area who works under the moniker r beny.  His work is a journey that explores the timeless and beautiful notions of human emotion and nature.  Mr. Cairns and I spoke fresh off the release of his new album, Cascade Symmetry.


Evan Jones First off, let's get the formalities out of the way.  What's your name, and who are you?

Austin Cairns My name is Austin Cairns and I make ambient music with modular and hardware synthesizers under the name r beny.  I am based in the San Francisco Bay Area, where I was born and raised.

EJ And who or what is r beny, and how did you arrive at and settle on (for lack of a better term) ambient music?

AC The name r beny came about almost by pure accident.  Essentially it is an homage to Canadian photographer Roloff Beny.  A few years back, I set up a YouTube channel to do a few quick tutorials on some the gear I was using at the time.  I needed a name and preferred to go under a pseudonym.  I had a few of Mr. Beny's books (of which I was immensely inspired by) and without being able to think of anything better, I came up with r beny on a whim.  I actually had intended to change the name, but the channel grew fairly quickly and the name just kind of stuck.

My roots in ambient and like-minded music go back even further.  I grew up playing guitar and it didn't take long for me to discover reverb and delay pedals, while at the same time discovering artists like Brian Eno, Tim Hecker and Boards of Canada.  I found ambient, experimental and electronic instrumental music to be highly emotional and expressive in a way that words were not.  I try to make music that expresses emotions, ideas, and memories that I otherwise cannot convey.  Ambient music has been the perfect vessel for that.

EJ That's the second time I've heard about your YouTube channel.  I suppose I need to check it out.  I had not heard of that photographer though, and just looked him up. His photographs are beautiful, and I get the connection between your work and his.

Is he part of the reason for the emphasis on photography of your album covers?  Both covers are beautiful.

AC The original tutorial premise of my YouTube channel has long since been abandoned.  It's become mostly one-off live tracks, either featuring specific pieces of hardware or specific techniques relating to the hardware.

I can't say his photography work was explicitly the reason for the use of photographs for the album covers.  Photography has been another long-time hobby of mine, specifically 35mm film.  Beyond other music and emotion, my music is immensely inspired by the visual world and by nature.  The covers were a culmination of all of that, and that includes being inspired by his and others photographers work, but mostly trying to connect the visual inspiration to the music.

EJ What do you think it is about ambient music specifically that so effectively conveys emotion?

AC When you remove lyrics, percussion and rhythm from music, I think the ear tends to pay more attention to melody, texture, and space.  I can't speak for everyone, but those are some of the things that help define emotion in music to me.  Hearing a certain texture will make me feel sad, or happy, or it will remind me of an old friend, etc.  I think it's a trait of primarily instrumental music, not just ambient music.  I remember reading something in a magazine once that likened it to painting with sound.  In that, I think it's hard to exactly quantify why it conveys emotion so well.  Part of that has to come from the listener being open to it as well.

EJ I didn't know you practiced photography as well.  Are the photographs on your albums yours then?

AC The album cover photographs are indeed mine.  I love the way film looks.  No matter what you shoot, it just adds a special quality.  I don't consider myself a good photographer, it's the film that's doing all the heavy lifting.

EJ I'm a painter by trade, and thinking about synthesizers in context to visual art makes complete sense to me.  Music in general is a lot like painting, but synthesizers with their blinking lights, the color-coded chords shooting out everywhere, the physical and heavy presence of a synth setup, are much like visual art.  And yet at the same time, they are also pieces of technology.  Sound robots.  So in one way it's kind of the antithesis of what we generally think of as visual art and yet as you said, they convey emotion so effectively.  Is that contrast, between the organic nature of sound and the inorganic nature of the tools you're using, something you pay attention to or try and utilize in your work?

AC The contrast of organic sound and inorganic instruments is something I think about all the time. Electronic instruments can be very rigid or cold, too robotic.  I try to add a bit of a human element to things, off kilter patterns, flaws, lots of movement.  It can be hard when working with sequencers to make things sound organic.  On my new album, I ended up playing most of the parts by hand, rather than sequencing.  The different parts shift in and out of time with each other.  Every part separately is very loose, but it all comes together when you hear the whole piece.  I found that process very inspiring and hope to explore that a bit more in the future.

EJ You use film in your photographs and for me, film immediately conjures ideas of a different time, even maybe a time we haven't experienced but can feel part of because of the quality of the image.  In short, film is nostalgic.  Synthesizers are antiquated sort of in that same way, and I get a really strong sense of nostalgia especially from Cascade.  Are you thinking about nostalgia at all when you're making your work?  Do you think that's something that just comes with the territory of the tools you're using?

AC I think about nostalgia quite a bit, both when making music and in general.  I have an interesting relationship with it. I think there's a fine line between nostalgia being powerful and moving, and nostalgia being forced and uninspired.  I love the type of nostalgic quality that film brings out of photography and that tape brings out of music. There's definitely a deliberate attempt at nostalgia in my music, I like to think it comes from places of truth - trying to evoke past events, time periods, relationships. Synthesizers and tape recorders certainly go a long way in being able to evoke those feelings.  But it's a carefully thought out process - like shooting on film compared to just slapping a washed out filter on a photo.

EJ I would assume also that you're trying to put it into the actual writing of your music as well?  And is the theme of nature in your work part of that?  I get the sense that nature is nostalgic for you, where it's not exactly about nature itself, but about us existing in nature, if that makes any sense?

AC I'm definitely aiming for a sense of nostalgia in the writing of the music.  The tools just happen to lend itself to those senses very nicely.

EJ So that sort of makes me think of sci-fi themes.  Maybe because I just saw Blade Runner. Are you playing with ideas of time in that way too?  Putting us in different places in both time and space?

AC I'd say the idea of time and space don't enter the conversation too frequently.  Perhaps it's bleak, but I often think of the end of humanity; nature winning out, or at least humanity wiping itself out. What would that be like?  But it's not something I'm thinking about too much when making music.

EJ I knew there was a reason I wanted to talk to you! Haha I often think of the end of humanity as well.  I think your music made me think of this, because when jotting down my notes for this talk, a question that popped into my head is where do you think the human race is headed?  Sometimes I wonder if we're already at the end and we just don't know it yet. Are you hopeful for us or do you think we've kind of reached the end of the line?

AC Hah, hopefully I don't come across as too cynical.  I like to think I'm a realist.  Right now, I think humanity is on the fast track to...I won't say the end of the line, but a rather bleak future.  Nuclear weapons and the people in charge of them are undeniably terrifying.  Our climate is rapidly changing for the worse and we are not doing enough to prevent it or prepare for it.  Technology is growing and will continue to grow at a blindingly fast pace - this has major implications for the world's economies and things like health.  Everything is rapidly changing.  Would we even be having this conversation 100 years ago?

I think all you can do is hold out the best hope you can muster.

EJ To me, all the things you just listed are certainly a danger, but the glaring reality that we're just starting to deal with, and that you pointed out, is the unstoppable advance of technology. 100 years ago the world was nearing the end of the first globally devastating war, which probably looked and felt like the end of it all, but we weren't exactly dealing with replacing ourselves through our own creation.  That idea is something I'm not really sure we've had to deal with before?

I think it's interesting to consider something like your music in that context because your music wouldn't have been possible 100 years ago, and we wouldn't be able to "talk" across the continental United States with near immediacy, you know?

AC A lot of the technology being developed right now is scary because not a lot of people are questioning it.  The ethical side of it.  We haven't dealt with anything like it before and it's almost impossible to because of how fast it changes/develops.

Being able to share my music and meet and talk to all sorts of amazing people - none of that would have been possible without this technology.  I sometimes don't know how to react to it because I'm extremely grateful to be able make those connections with people.

R Beny's music can be purchased here: https://rbeny.bandcamp.com, and you can see more of Austin's beautiful photographs and synth sketches on his Instagram, here.


Posted by Evan No comments: